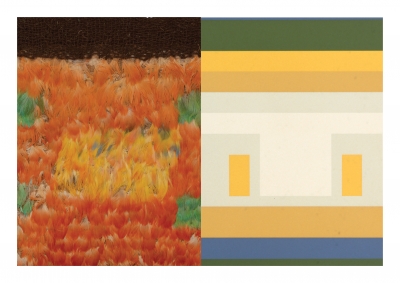 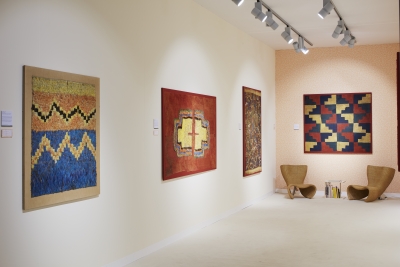 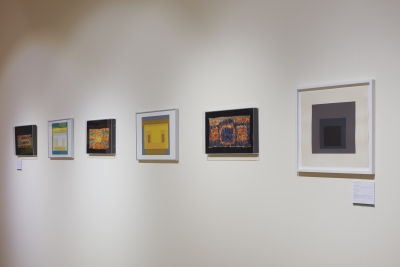 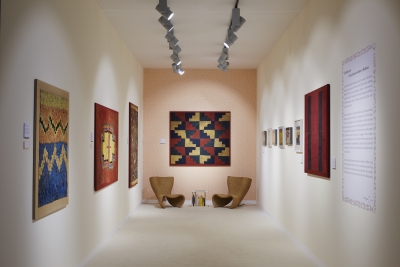 Among many other artists at the Bauhaus, including Paul Klee and Johannes Itten, Anni and Josef Albers were the most avid admirers of ancient Andean textiles. This later developed into a common thread for their students at Black Mountain College to explore links to a Pan-American legacy in abstraction. The Albers first encountered Andean Pre-Columbian textiles around 1922 at the Museum für Völkerkunde in Berlin. After migrating to the United States in 1932 they soon began making frequent trips to Latin America, collecting ancient art from many regions. They spent 1953 in Peru and formed a museum-quality collection of textiles that remains in the public collections of the Josef and Anni Albers Foundation and the Yale University Art Gallery. The composition of this illuminating feather poncho resonates with what Josef Albers had captured during a trip to Monte Albán in Oaxaca. Transcribing the typographic outlook of Monte Albán into a geometric composition, the juxtaposition of these two artworks fully manifests the Albers’ kinship with ancient Andean weavers in aesthetic composition, color values, and technical skills.

Paul Hughes Fine Arts focuses on affinities between ancient pre-Columbian arts and modernism, documenting the rich, cohesive effect they had on societies then and the confluences brought about by the interweaving of art disciplines over three thousand years. All arts were once contemporary. Ancient textiles have greatly influenced twentieth- and twentyfirst-century aesthetic developments and are collected by many important artists, from modern masters such as the Albers and Roberto Matta to contemporary designers and artists. In light of this, the gallery’s programs focus on the elaboration of a cohesive art history and aspire to stimulate conversations between ancient and modern arts.